The midsize pickup truck market has been growing, but it's fair to say that the Toyota Tacoma is still the odds-on favorite for a lot of shoppers. From its basic work-truck configuration to luxury-oriented or off-road variants, the Tacoma is simply one of the most well-rounded pickups on sale today. Improvements for the 2020 model, combined with historically strong resale prices, make this year's Tacoma a better value proposition than ever. It starts on the inside where it gets a larger touchscreen and a new infotainment system that finally features Apple CarPlay and Android Auto integration. These additions make it a lot easier to avoid using Toyota's proprietary Entune software, which isn't particularly intuitive. Other modifications include a recalibrated automatic transmission — which helps reduce the sluggish feel that plagued last year's Tacoma — and a power driver's seat that offers greater adjustability for improved comfort. As before, a relatively tall ride height may inhibit entry into the cabin, but it also means every Tacoma is ready to head off the beaten path at a moment's notice. The same is especially true of the two off-road trims that feature a superior approach angle, beefy shock absorbers and a lockable center differential to increase its adventuring potential. New downward-facing cameras further help you avoid any frame-bending obstacles you may come across. The Tacoma is offered in six trim levels: SR, SR5, TRD Sport, TRD Off-Road, Limited and TRD Pro. The entry-level SR is the work truck of the bunch, with the value-oriented SR5 offering more equipment and more choices. Next up are the very popular and well-equipped TRD Sport and TRD Off-Road variants. The two are identical on the inside, but hardware differences make the TRD Off-Road more capable when the going gets rocky. Finally come the street-oriented Limited, which has a long list of creature comforts, and the TRD Pro, the most off-road-capable Tacoma in the lineup. While the SR is the least expensive Tacoma, it isn't entirely bare-bones. It can be had with an extended cab (Access Cab) with a 6.1-foot bed or a crew cab (Double Cab) with a 5-foot bed, and you can choose between rear-wheel drive or part-time four-wheel drive with a low-range transfer case. Its 2.7-liter four-cylinder engine (159 horsepower, 180 lb-ft of torque) is paired to a six-speed automatic transmission. Other standard equipment for the SR includes 16-inch steel wheels, a sliding rear window, heated power-adjustable side mirrors, a tough composite bed that needs no bedliner, and a movable cleat tie-down system. Inside, there are manual front seats, cloth upholstery, a Wi-Fi hotspot, a 7-inch touchscreen, Apple CarPlay and Android Auto, and a six-speaker audio system. As with other Toyotas, the Tacoma comes standard with many advanced driving aids, including forward collision warning with automatic emergency braking, lane departure alert, automatic high beams, and adaptive cruise control. For most buyers, the SR5 is the better deal. On top of the SR equipment, you can also get a long-wheelbase version that pairs the crew cab with the 6.1-foot bed. On the outside, you get some chrome exterior trim, remote keyless entry, a leather-wrapped steering wheel, and an 8-inch touchscreen. Double Cab models also get alloy wheels. If the standard four-cylinder doesn't have enough power, the SR5 offers an optional 3.5-liter V6 (278 hp, 265 lb-ft). All rear-wheel-drive versions use the six-speed automatic, but four-wheel-drive buyers can choose between the automatic and a six-speed manual. SR5 models driven by the V6 include a 10-way power driver's seat and an auto-dimming mirror, while Double Cabs with this engine also add a power-sliding window. Next up is the TRD Sport. It is offered in the same cab and bed configurations as the SR5, but the V6 is standard. It also comes with 17-inch alloy wheels, body-colored fender flares and rear bumper, heated mirrors, a hood scoop, a 120-volt/400-watt power outlet in the bed, keyless entry and ignition (for automatic-transmission trucks), and a wireless smartphone charging pad. The TRD Off-Road offers nearly the same configuration and engine options as the TRD Sport, and its truck bed, interior and audio trimmings are identical. Visual differences include a chrome rear bumper, textured black fender flares, 16-inch wheels, and the absence of the Sport's hood scoop. Off-road performance changes include the deletion of the front airdam, a lockable rear differential, Bilstein monotube shocks, and an advanced off-road traction control system with multiple terrain settings and crawl control. Both the TRD Sport and the TRD Off-Road crew-cab models can be upgraded with a few option packages. Feature highlights include a sunroof, parking sensors, forward- and side-looking cameras, blind-spot monitoring with rear cross-traffic alert, dual-zone automatic climate control, heated seats, leather upholstery, a navigation system, and a seven-speaker JBL audio system. It's worth noting that the stereo upgrade is not available on models with the manual transmission. The Limited is the most refined version of the Tacoma. It is only offered as either a two- or four-wheel-drive V6-powered crew cab with the short bed. It has a body-colored rear bumper and flares, and it rolls on 18-inch wheels with lower-profile tires. This trim lacks the TRD Off-Road's specialized off-road upgrades and is instead upgraded with just about all of the Off-Road's and Sport's optional features as standard equipment. The TRD Pro is sold only as a crew cab with a short bed, and it comes only in four-wheel drive. The V6 engine is standard, but you can choose between the manual and the automatic transmission. It's equipped like a loaded-up TRD Off-Road. But it sets itself apart with special styling details, including a black grille and LED headlights, plus performance upgrades such as Fox internal bypass shocks, all-terrain tires, a thicker front skid plate, an upgraded exhaust, and a ride height that's an inch taller. 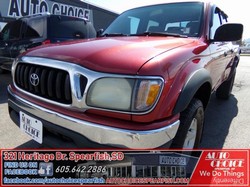 Ready to drive this 2019 Toyota Tacoma 4WD? Let us know below when you are coming in, and we'll get it ready for you.